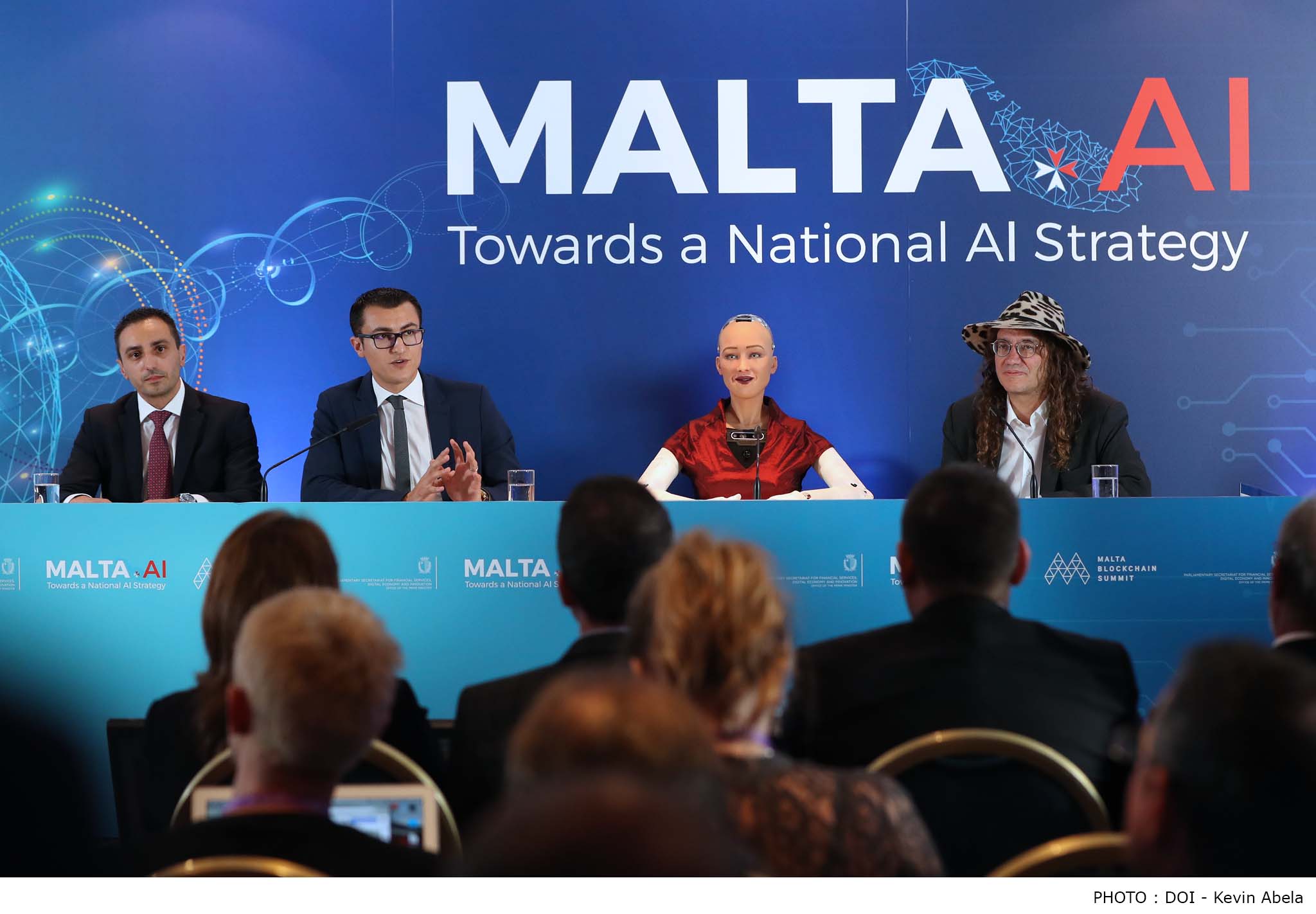 Junior Minister for Financial Services Digital Economy and Innovation, Hon. Silvio Schembri announced a taskforce entrusted to design a national strategy on AI with the aim of placing Malta amongst the top 10 nations in the world in AI.

Malta.ai to collaborate with SingularityNET, the company behind Sophia, on a pilot project to explore a citizenship test for Robots in the process of drafting new regulation for AI.

“After succesfully positioning Malta as The Blockchain Island, by being the first in the world to regulate DLT Products and Services, we now would like to position Malta amongst the top 10 countries in the world with an Artificial Intelligence Policy” said Schembri.

In the presence of Sophia, the AI Robot, Silvio Schembri explained that Malta will develop a National Artificial Intelligence Strategy cognizant of other strategies being pursued on DLT and IoT.

“Our objectives are to dialogue with stakeholders, to build awareness of the key topics and issues that will inform a national AI Framework, consult on a policy that considers for ethically aligned, transparent and socially responsible AI, identify regulatory and fiscal measures to strengthen Malta’s appeal as a hub for foreign investment in this sector and identify the underlying skill base and infrastructure needed to support AI” said Schembri.

The strategy will eventually develop cutting edge use-cases of how AI could be deployed in Malta as a central part of this policy and understand how AI can be applied by Government to further improve the services given to the citizens.

The drafting of a National AI Strategy will be in the hands of the Malta.ai taskforce under the responsibility of the Malta Digital Innovation Authority recently entrusted with regulation of DLT products and services.

“In the process, we have invited SingularityNET and the team behind the AI of Sophia the Robot to contribute to Malta.ai entrusted with the AI Strategy.  Amongst others, with SingularityNET, we shall explore a pilot project to create a citizenship test for Robots in the process of drafting new regulation for AI.  The citizenship test will serve as a tool to measure how much Robots understand citizenship and civic rules, in order to help in the drafting of new AI regulation that will harness the use of AI Robots for the benefit of the people.  Through Malta.ai, we would like to invite other firms who wish to contribute and be part of our journey in AI.  This is the start of another chapter in Malta’s vision to become a technological hub.  We look forward to work hand in hand with all stakeholders including european institutions on artificial intelligence” said Schembri.

Dr Ben Goertzel, CEO at SingularityNET said  “We are extremely excited to be a part of the government of Malta’s creation of an AI-focused task force. The creation of the task force itself shows the government’s recognition of AI’s tremendous potential—and the reality that it must be balanced with risk, policy and ethical considerations. The task force’s creation is just the very beginning, too. I’m confident the impressive mix of academics, entrepreneurs and experts being pulled together for the task force will put Malta in a leading position, creating an industry and applications better than many of us can imagine.   The bottom line is, if we want the amazing advances in AI that are going to happen in the next couple decades to benefit all of humanity, then we need a wide swath of humanity to participate in creating the next generation of AI, and infusing it with their values and intuitions.   The flourishing of AI in all its aspects in Malta, which we are seeing now with this Task Force, has potential to play a major role in making sure the coming AI Singularity is a positive one for everyone.”

AI is expected to underpin $15.7 trillion of global economic growth by 2030.  It is expected to impact every economic sector and transform current jobs and create new ones. It is estimated that over 2000 companies globally working in this sector raise over $36.7 Billion. It will diversify broad sectors in IT and Engineering resulting in the creation of new jobs of the future.

The Maltese Government is looking at AI as means to improve the health and well-being of our citizens, to make government services more accessible, to provide information that is more relevant to the public, relieve employees from simple or repetitive tasks and allow them to focus on more complex high value added activities. It will also address data backlogs with cognitive technologies, which can also perform end-to-end processes on a massive scale while leaving the harder for human experts.